On 25th April we were privileged to visit the Type Archive in Stockwell, South London as part of the Essex branch of the British Printing Society. This organisation, housed in a former Victorian animal hospital, holds in trust a national archive of  type going back to the very beginning of the print industry in Britain.

Blue plaque on the house in Hackford Road

Stockwell is an area of south London with a mixture of council estates and many streets of  handsome Victorian dwellings. It was surprisingly quiet. We followed the directions to Hackford Road to its dead end, where the gates of the archive were closed until the appointed hour. Van Gogh once lived in a house on this street and there is a blue plaque on the house which I think cannot be much changed.

As we were joined by some other members of the party, the gates opened and we were invited in by a volunteer, Stepping in through a low stable door, we were delighted to find ourselves within a press workshop containing among others an Albion, a magnificent Columbian, and a Heidelberg.

Part of the room where casting machines are worked and displayed

Across the yard and up the stairs is a large collection of monotype machines, including one of the very earliest that predates the QWERTY keyboard, and one that was gas powered.  A demonstration of casting individual sorts was taking place – a fantastic but perilous spectacle. I am sure the operators must have all ended up completely deaf, and splash burns from hot metal would have been badges of honour. 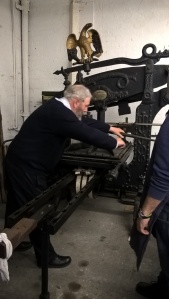 We then returned to the press room to try our hand at printing on the Columbian. Compared to the wooden press, winding the rounce in and out was an almighty effort, but pulling the handle very easy due to the counterweighted lever. 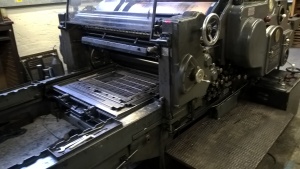 The acme of letterpress printing – a lovely machine

After this, we watched Len Friend demonstrate the Heidelberg. There is really something symphonic about this press. Being a low-tech kind of person, it is hard for me to describe correctly, but the paper is lifted into the press by a line of small vacuums, then disappears into a series of cylinders. Meanwhile at the other end the forme flies in and out, underneath the cylinders where it is inked and then the paper, rolled onto another cylinder, passes rapidly over the forme. The sound the press makes is rhythmic and loud, not harsh – compared to the Monotype casters – an evocation of effortless power.

In the matrix making area

The final part of the visit was to Kumar who works alone in his domain, surrounded by many machines and his job is to create matrices, the masters from which the types are cast. This is esoteric indeed. It’s easy enough to explain printing as it was, which is producing the finished article seen by the public, and can easily be understood. But to explain casting type is to take one step back, and to explain creating the matrices is one step back again into the fine detail of the process of letterpress printing. It was feared that Kumar might have been the last of his kind, but just before we left we met Sue Shaw, one of the trustees of the Type Archive, and she explained that one of the missions of the Type Archive was to pass on this precious knowledge to volunteers, and that two were being trained up in the process. It was good to meet Sue and the volunteers there. They are down to earth, practical people but completely dedicated to the preservation of this heritage. If this had been left just a few years more so much knowledge would have been lost, but there is still a race to preserve what we have, that just 20 years ago was being thrown aside. I am not sure that the Archive could operate as a public museum in its present site but it is performing a great unknown service to the country, and long may it continue. 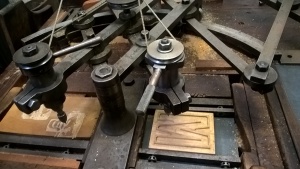 This giant pantograph was used to up- and downsize lettering. Looks like it could be a lot of fun.