SO, before Christmas I’d bought my press points from Harry Rochat’s and thought no more of it. Then in early February I got a call from Lynne, one of the folks there. Would I like to bring a forme over to the workshop, to demonstrate the action of the Rochat Albion press to a customer? When I heard that this customer was Dr. Patricia Fumerton, the director of EBBA, I was more than interested!

EBBA http://ebba.english.ucsb.edu/ stands for English Broadside Ballad Archive and is run by the University of California at Santa Barbara. For anyone wishing to research British social history in the seventeenth century, it’s a truly marvellous resource, comprising an open-access database of broadside ballads of that era. Not only are the facsimile scans presented, but also text transcriptions and recordings of the ballads being sung. Thus the music that was so well known in those days, and heard in alehouses, streets, cottages and fields through the land, is restored to life through this wonderful project.

Now Dr Fumerton intended to come to London to buy one of Harry Rochat’s new Albion presses, so that UCSB students could experience every facet of producing a ballad.

Although iron, and of Victorian design, the Albions have the same tympan-frisket-fold down and roll under the platen-pull the handle action that common presses had. They have significant improvements and it’s no accident that, although Albions were quickly supplanted by powered presses for commercial work, they  lived on as proofing presses before being taken up by artist-printmakers when relief printing was revived in the early 20th century.

I quickly set to work to choose a ballad to prepare. Where else to look but EBBA? I had to prepare some work for the  1667 anniversary events that are coming up in June – more on that another time – and so I decided that I might as well make a start on that. Using the search term “butter boxes” (apparently an insulting term for the Dutch in those days!) I found “The Lovers’ Farwell” and selected some verses. I didn’t have time to make new blocks so I got some out of my store – a portrait of King Charles II and a generic swordsman.

Saturday 18th March was the day set for the proofing. We arrived around 8.30 with the forme and other bits and bobs, and got ourselves organised on the workshop before a knock on the door announced the arrival of Dr Fumerton and her graduate assistant Kristen McCants.

After the usual scary moment when the forme is slid onto the stone and you pray that nothing falls out, we took our first proof and discovered that, although the Albion printed the type beautifully, those pesky blocks were not type high!

I’ve used them before but it’s been a while…I guess that I just forgot the packing that I must have used on previous occasions. However, David and Leon had a quick fix to hand by putting some packing on the back of the tympan. We managed to get an impression of the blocks at last, but what struck me was that we were able to repeat print on the same piece of paper 2 or 3 times, without any slurring of the type.

Pulling the handle of the Albion

I think the Rochat press gave a good account of itself. In between these technical hitches and tests, we chatted, joked, swapped tips,  drank tea, had some chocolate and chatted some more. The morning went so fast, it was just so much fun to speak with people with this passion for print. All too soon, it was time to go our separate ways…Patricia and Kristy onward on their mission to collect more ballads for the archive before returning to the USA…us to return home and start to prepare new blocks for this forme…100% type high! 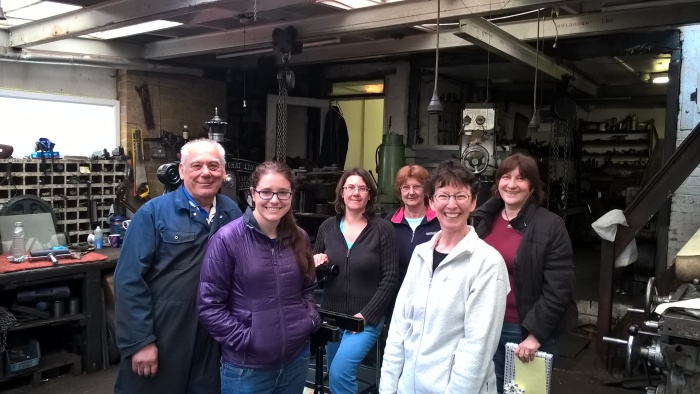 A big vote of thanks has to go to Lynne, David, Leon and Christine  at Harry F Rochat for bringing us together. It’s brilliant to know that this business http://www.harryrochat.com is so near at hand and producing very high quality presses in the 21st century.