Saturday, 10th February 2018 is the day devoted to Cribbage throughout the card-playing world!

Devotees and would-be players will gather in the East Anglian city of Norwich to celebrate, learn and participate in tournaments. The day was chosen as it is the birthday of the game’s inventor, Sir John Suckling, in 1609.

Sir John, in some ways, was the archetypal romantic Cavalier. His  portrait is of a typical ‘spark’ of the 1630s, with a jaunty look and clothing in the faux-pastoral fashion of some Court portraits at that time. He was a famed poet and playwright, courtier and sampled military life as one of the English volunteers in the army of Gustavus Adolphus. Money was plentiful at first, as he came into a wealthy estate at the age of 18, but Sir John’s love of gambling eventually caused it all to disappear. John Aubrey (1626-1697) in his “Brief Lives” says “He was incomparably ready at reparteeing, and his wit most sparkling when most set on and provoked. He was the greatest gallant of his time, and the greatest gamester both for bowling and cards; so that no shopkeeper would trust him for 6d., as today for instance he might, by winning, be worth 200l. and the next day he might not be worth half so much, or perhaps be sometimes minus nihilo.”

It is also Aubrey that stated that Suckling invented the game of cribbage. The game that Sir John invented was derived from an earlier game, “Noddy”, which was played in Tudor times. The word Noddy at that time meant a fool, but as far as the game was concerned, it referred to a Knave (as Jacks were then known) turned up in play. Sir John’s innovations were to increase the hands dealt from 3 to 5, and then to put the extra 2 into the crib which each player holds in turn. He increased the winning point total from 31 to 61. There were other changes, but these, and his stratagem of sending “his cards to all gaming places in the country which were marked with private markes of his”, were not enough ultimately to preserve his income as a courtier. He overspent badly when he fitted out and led a cavalry troop in the so-called “Bishop’s Wars” between England and Scotland in 1639-40. Having also taken part in a failed plot to save a minister of King Charles’s, and with his money and credit worn away, he fled to France and died in 1641, reputedly by his own hand.

Poor Sir John Suckling did not live to see the start of the Civil War, but his invention survived the Parliamentarian strictures and puritanical edicts that followed through the years of war and the Commonwealth, and flourished(with some changes) into the 20th century, being especially popular in the USA as well as the UK.

As the 21st century began, it was fading like many other pre-digital pastimes, seen as an old man’s game. Lately, however, there has been a revival in so-called “analogue” things, spearheaded by millennials to whom digital technology is not a novelty and who are eager to discover the pleasure of tangible objects and activities. Teachers too have realised the value of this game for learning mental arithmetic, for if you don’t reckon up your scores quickly at the end of each hand, your opponent can call “Muggins” and take them for you!

In Britain, the UK Cribbage Association (UKCA) has been set up to co-ordinate players across the country and puts them in touch with leagues, usually formed of teams in local pubs and clubs. One of their members,  travelled throughout England to unearth this underground movement and his aim is to bring it back out to the light. It’s a  great way for both young and old to keep minds agile and, dare I say it, does something for the pub trade too. You can read more about his exploit in his own blog here

Wishing all success to everyone taking part in International Cribbage day 2018! 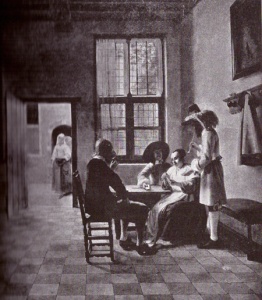